Along with Mt Bartle Frere, Queensland’s highest mountain that I climbed a couple of years ago, the Pyramid in Gordonvale has also been on my exercise hitlist radar.  Each year in August, the little town of Gordonvale hosts the Great Pyramid Race.  Legend has it that the race originated when two local cane farmers were sitting having a drink at the pub.  The men decided to settle an argument by seeing who could make it to the peak of nearby Walsh’s Pyramid first.  A wager was made and the day set for the very first race.  It generated so much interest with the locals that a bookie took bets on the outcome and The Great Pyramid Race was born.  The first official race ran in 1959 and the fittest and bravest come to compete each year.  After climbing the mountain at a comfortable pace I did wonder how people ‘race’ the Pyramid and am not surprised that this quote is used in promoting the race!

“A never-ending uphill scramble and a ‘controlled’ downhill free fall”

One thing I love about an exercise challenge is that it can be quite social.  Or maybe I just have friends that are the same kind of crazy as I am.  Even though it was summer in the tropics (read hot and humid) I had two friends immediately volunteer to come with me.  One friend travelled 4 hours to catch up for a couple of nights, and the other was up at 4am to drive ninety minutes to meet us at the base of the mountain.  I am very thankful for such good friends who make the effort as my visits are very few and far between these days.

I was a little worried that it would be quite difficult to find the start of the track (and copped some good-natured ribbing about my recent adventures getting lost) but I am happy to report that it is quite well marked.  From the Gordonvale Service Station it is only 5 minutes drive along the highway, heading towards Innisfail, that you will come across Moss Road on your right hand side.  There are signs for parking ahead and you will come to a gravel parking area after only a couple of minutes.  The track is well marked, no really it is, I don’t think even I could get lost.  From all I had read this was supposed to be a 6km return climb but the girls and I think that it could be a bit closer to 8km return based on some markings on the track and how long it took us.  The time to the top for us was 3 hours and only 90 minutes back down at a fairly comfortable pace.

We left at 6am from the base and would not leave it any later in summer.  It was a really hot and humid morning and I was literally dripping half way up so make sure you have plenty of fluids if you are crazy enough to do it in Summer.  There were quite a few people on the mountain which did actually surprise us.  It would be a beautiful walk in the cooler months.  It WAS a beautiful climb even in the heat and one everyone with reasonable fitness should try.  The views are amazing. 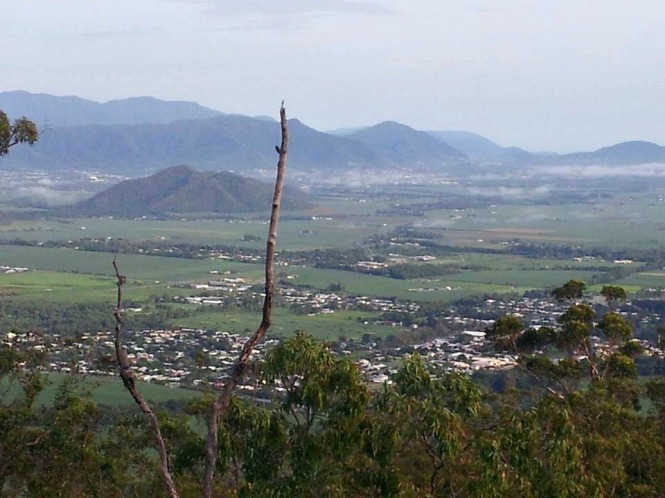 Half way point – early in the morning

Looking out over Cairns in the background

The track was quite steep in places with quite a few scrambles up rocks however there were plenty of flat-ish sections to catch a breather. 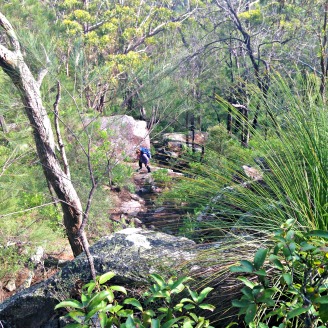 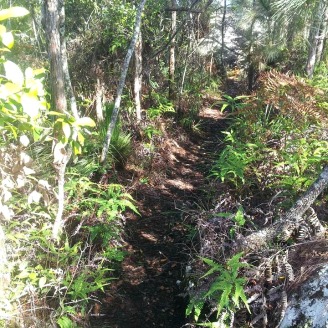 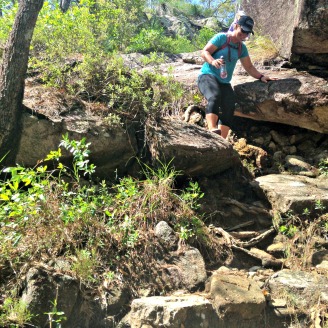 We did find that just when you thought you were near the top…..it wasn’t…..then you would think that this must be it…..and it wasn’t……then finally this must be it……and we still weren’t quite there.  Eventually we did make it and I love this photo taken of my good friend at the top of the Pyramid as it just seems to capture the spirit of adventure and satisfaction from making it to the top.

Thanks ladies for a wonderful catch up, we will have to start planning our next adventure.  This was a wonderful hike, so give it a go next time you are in the area!

Well I am finally back in action after quite a long leave of absence.  What have I been up to?  Let me give you a quick summary of all the things that I have been doing over the last five weeks….

It has been a busy, but wonderful four weeks and now we are finally settling in to our new life at Pannawonica.   It is a small town of approximately 800 people with one grocery store, a gym, a school, medical centre, library, post office, tavern and sports club, and a pool.  We can walk from one end of town to the other in about 10 minutes and I have learnt that a ‘Bung Arrow’ is a goanna.  Apparently the locals feed the goanna’s to keep the snakes away.  I have heard that the flies are not so bad this year but even so I have snorted quite a few from my nostrils and have had my husband look at me like I am a creature from another world as I preceded to gag, cough, spit, and splutter in front of him to try and stop myself from swallowing a fly.  Hmmm, such a lady, needless to say I had already swallowed the fly.  The temperature has been mid to high forties this week with the highest being 49oC.  Despite all this I think we will quite enjoy our time here and I have a hitlist already started!! I have a backlog of blog posts that I will get to in the near future including the following:

I will also be trying to add a few more Rehabilitation and Injury Prevention posts in the future.  If you want to hear more about anything else that I have done over the last few weeks or other topics in general please let me know in the comments.

My Next Big Adventure

What are you looking for?