There is a reason I love having my hitlist, well there are many reasons, but one of them is that it keeps me focused and allows me to feel like I’m getting things done.  It is easy to get caught up in everyday life, in being reactive and surviving the days rather than achieving and moving forward in whatever form that may take.  Over the next few weeks I will be aiming to cross a few items off my current hitlist.  Can’t remember it?  Neither could I, so here is a refresher…..

I have quite a few of these underway or completed, but this week was all about completing the gym timetable.  Initially the aim was just to attend all the classes, at least once, when I have the time.  I really like trying different things as how do you know whether you will like them or not if you don’t give it a go??  I always find there is a lesson to be learnt in each new activity I try.

This week I decided that enough was enough I needed to start crossing some items off my hitlist starting with the timetable challenge.  Just for fun, I decided to do all the classes in one week.

It was tougher than I thought, especially the tail end of the week from Bootcamp onwards. Bootcamp was good old fashioned fun outside with big old tractor tyres, battle ropes, sprints, plyometrics, and good old squats, push ups, and sit ups.  It hurt, and it ensured that the rest of the week hurt too.  Ouch!

Mother’s time on the Monday was 100 Club which if you have been following along, you will know it is 100 reps of about 6 different exercises broken every 5 minutes by a 1 minute plank.  It’s a great mixture of upper and lower body strength work, core, and cardio, that leaves you gasping for breath and hurting the next day.  Burn is a session that is typically up to the trainer’s discretion but always lives up to its name and ensures that your muscles will be burning by the time they are finished with you.  On the Monday it was a great little whole body workout with barbells, medicine balls and lots of lunges.  Lucky for me Tuesday was a rest day from classes and a chance to recover.  I did squeeze a short training run in with Team Rangas though.

Wednesday was Bootcamp as explained above, before doing a double on Thursday.  Mum’s time was a killer partner circuit followed by a barbell workout in the Burn class later that night.  Friday’s 100 Club was probably the toughest session for me as we had spent the day in Karratha, I was tired, sore, and it was a Friday night.  Some days you just have to suck it up and get it done. 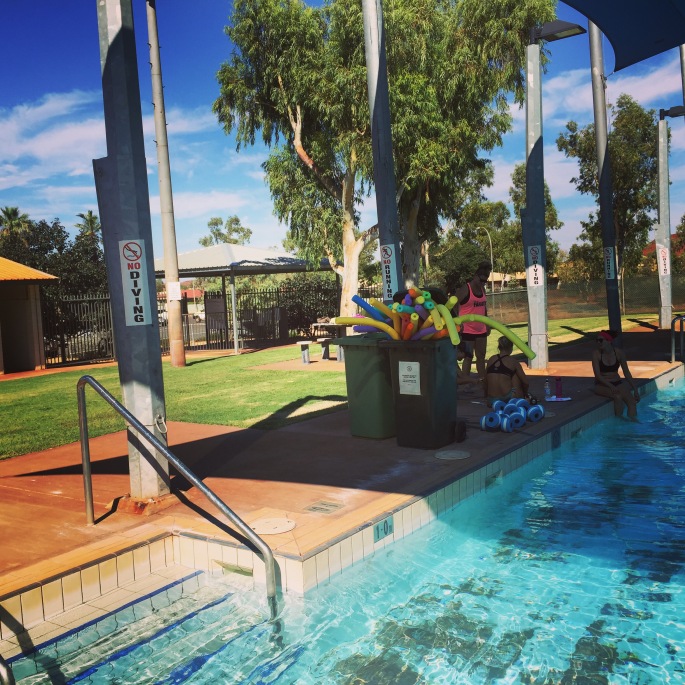 Following the hard slog on Friday night it was downhill from that point, just had to push through an Aqua session which was a little harder than expected.  Not so much the ‘blue rinse set water aerobics’ I was half dreading and instead a good mix of strength and cardio.  The final session of the week was Yoga (thankfully Jana was the trainer on this swing otherwise we would have been doing a boxing session, which I have done previously and it possibly would have broken me).

And that, people, is how you rock the timetable!!  Ok, now I am crawling back onto the lounge and enjoying a rest day!

Have you tried all the classes at your local gym?  Do you mix up your routine every now and again?  Go on, give it a go….

My Next Big Adventure

What are you looking for?